Handwritten Theatre Five: "One side is windy, the other is not." 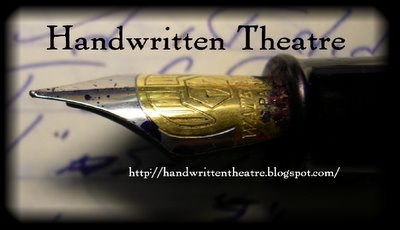 The landmark fifth in a series of short dramatic pieces to be presented under the coveted Handwritten Theatre banner. If you enjoyed a cocktail during the previous play, I'd suggest some hot coffee for this one, served in a cardboard cup and held with both hands for warmth; it's cold where we're going.

Old business: Someone who listened to "I could tell you stories, but I don't think you'd want to hear them" asked me, "Where did that come from?" Well...

"The really odd thing is that I've written probably fifteen plays, including short plays obviously, and I really don't know how I've done it. I don't know where they come from and how I managed to write any of them at all. I really don't. It's most odd. I can't think how I did all that work."
-Harold Pinter

Handwritten Theatre Five: "One side is windy, the other is not."
Performed by Donna Allen Figueroa and Moira Quirk
Running Time: 12:32
All Audiences
Posted by Joseph Dougherty at 9:25 AM